I was just praying this morning, as I was getting awake, taking care of those morning necessities, etc., and I heard The Holy Spirit of God saying, “The problem which those "leading" or "shepherding" my "Church" has had, is that they keep trying to equip people that they haven't gotten free, or delivered from fleshly or demonic strongholds. They've lacked discernment, anointing. They've been running on religion, not My Spirit.

Wow. Now that is a download and a half. But it is so true! For years people kept trying to convince me that I was just choosing to be a crank! When in actuality, I was getting up much earlier than they were, seeking God with a fervency that I doubt they ever touched, to get rid of whatever was causing that! Yet some stubborn strongholds, which were mostly direct response to some severe trauma, were never being discerned, much less addressed or dealt with.

The leadership meant well! But without proper discernment they just kept loading more burdens of shame, failure, and responsibility on me, until I was near the point of breaking down. And I have seen this happen to so many. It is one of the reasons most of my children are currently more in the world than "The Church", and rather despise going near the place!

WE - who would lead others in the spiritual realm - must first walk in true Faith ourselves. That is FAITH, in The ONE, Who was, and Is, and Always will be, Anointed to MOVE burdens and DESTROY yokes of bondage! Yeah. That guy!

And we must learn to FOLLOW HIM, and become proficient at doing what He DID -  BEFORE we can successfully administer that freedom and anointing to others! We must learn, individually and corporately, how to MOVE IN HIS ANOINTING, before we can teach that, or model that Anointing!

But in order for US to load that Anointing and Authority onto our “hard-drive” we must first let The Spirit of God UNLOAD the flesh!!! He wants to cleanse us, wipe the fleshly programming clean, by tearing down our strongholds – no matter the origin of those strongholds - a.k.a. thought and habit patterns which control our lives and decisions. They can come from generationally produced thought and habit patterns, just passed down to us – and/or the health issues attached to those; OR, religiously spawned and cultivated doctrines of demons that is prohibiting our spiritual growth processes; or soul ties from sexual encounters that God has forbidden outside of a forever covenant; OR, witchcraft that has been worked against us through word curses – intentional or not – of well-meaning leadership, or pawns of satan sent to undermine God's work in us; OR trauma, from abuses of any variety, which caused deep soul wounds, and which caused us to make vows in self-defense, which now inhibit the work of The Spirit in us!

All of those things come under the heading of “yokes of bondage”, which are now subject to destruction through The Anointing of Yeshua!  He's the chain breaking, yoke destroying, champion of our fully loaded spirits! He is The One with the muscle to unload our trucks, and the know-how to reprogram our hard-drives, and hardened hearts! And make them palatable and re-loadable, with HIS way of thinking, doing and being!

He wipes the lawless “rules” of fleshly living, which make us tools of the enemy! And He installs The Torah Elohim, The Law of God, which works best with the Awe of God, in us, enabling our “computer” to read His program and perform what it calls for! Without straining, faking it, or breaking it!

Religion is a sorry substitute for a relationship with our God! And is a failed experiment of mankind. We really should stop pursuing that now. We need to show the world what this thing can really do! But first, we must let The Ruach reprogram us. And “WE” as His body in the earth, especially those of us old enough that we are being followed as we follow Him - we must reflect HIM to a dying world, by giving them what HE has given us. We can't do that though, if we don't let Him equip us, and learn how to instruct others in that same process. Time to wipe clean that earthly software and get fully loaded with His Anointing!

P.S. I just heard, “Reprogramming the Saint, To Redeem the Time....” 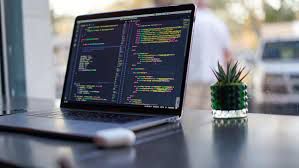 Published by Sandra Carlton Duncan
write a comment …
<< Coming Down Off The Mountain... The Prodigal Son - An Ancient... >>