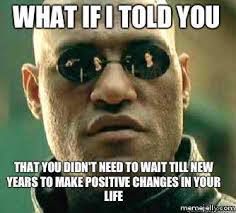 The New Year is upon us once more. Not God's “Beginning of the Year” mind you. Just the western arrogant's idea of their own bright new year, with Auld Lang Syne, lots of drinking, and merry making, plus a lot of “resolutions” the next day, coming out of their hang-overs, of how THEY will improve their lot THIS year! Hubris gone to seed, along with a huge dose of selective stupidity and/or denial involved in that process!

But this method rarely gets anyone to a different place. Year after year rolls by, and they find themselves making the same resolutions again and again. Forgetting that the new “meaning of insanity” is to “do the same things, while expecting different results”. Indeed. We – our society, but particularly those who consider themselves to be “People of GOD” - desperately need a new paradigm. We need HIS paradigm, instead of that of the Champagne drunken world, or the religion drunken “Church” system. We need to WORSHIP HIM in SPIRIT AND TRUTH.

But honestly, in my observation, most of humanity struggles in a zig-zaggy path somewhere between those two. Choosing one, then the other - first “Spirit” (too unstable), then “Truth” (too restricting) - eventually concluding (wrongly, but solidly) that neither works, and we should just “Eat, drink and be Merry for tomorrow we die!”. All or nothing. That is how humans function. When God's ideal is always a narrow place right in the middle of all and nothing. A place which requires discernment, discipline, faith and chutzpah – plus a great reliance on HIMSELF to succeed! None of which sounds appealing to the “normal”, unredeemed, human flesh.

However, these days, I am sensing that paradigm shift – I am sensing that a great release is taking place in those who truly desire to be a people set apart for GOD. For HIS use and purpose. Those who long to KNOW HIM, to SEE HIM, and OBEY HIM. The catch is that part of that release involves ME releasing what DELIVERANCE should look like! It requires me to give up any designs on how it should play out!

I find that this idea astounds and unsettles me. AGAIN. And then, I laugh. I have been HERE so many times at this place of transition! Spiritually AND physically! I have given birth so many times! I KNOW how this goes! I AM NOT IN CONTROL! EVER! I have NEVER been able, for the life of me, to accurately, YET, predict or foresee that path in front of me, why should now be different!? Oy vey! What stubborn Schmucks we are!

THIS time the “deliverance” in question involves Gene and I, and our UNITY. But I realize tonight, as I reel in agony after yet another severe head-butting between us, that I have been insisting on trying to define the DREAM, the “WE”, the “US”, which GOD mentioned, be the one that takes HIS VISION into the promised land!

But now – as of this moment – even as the clock strikes the Twelve A.M. Of the NEW YEAR ahead, I have FINALLY released that “right” to define this. HE has had the plan all along. So, what does this mean? Some scary possibilities immediately present themselves. Perhaps one of us were not to be among the ones to go in? Perhaps my function was just to get the kids here? Perhaps Gene doesn't have the constitution that I thought I saw? Or perhaps his/our prolonged, stubborn disobedience has disqualified one? I find that I was disturbed at first to discover that I can not say which outcome IS THE Will of GOD for us! It was startling - AGAIN - to face the uncomfortable fact that the only thing which brings His peace to my heart is utter surrender. To find I can only surrender my life, our lives, to God, to put it ALL on the altar. To hold those dreams, though they came FROM HIM, with an open hand of surrender TO HIM. That my best, indeed my ONLY recourse, was to express unqualified, unlimited TRUST in HIM who knows best. In HE, who has led me all this way, who has always rescued me, redeemed me, and resurrected me, when necessary!

However, SINCE I made that quality surrender, I sense that things are moving forward after all! I sense that the surrender RELEASED the DELIVERANCE for which I've been struggling, and agonizing! I feel rather like Abraham when the Angel staid his hand, and he turned to see a ram caught in the thicket! I feel relieved, as though deliverance IS happening, that something in the universal paradigm has shifted in my favor! In an instant of time I have gone from struggling under the weight of the entire universe, to somehow gliding above it, taking it all in, suddenly understanding the struggles, and overcoming them with effortless trust! God is just miraculous like that! He IS worthy of our Praise! And honestly, works so hard for so little of it! I don't know how or why He puts up with us, other than the reason HE gave, which is that He has an unfathomable LOVE for us silly beings that HE made!

We artist or inventor types can sort of understand a creator's love for his or her creations. But none of us would go to the lengths to which HE has gone to redeem one of our own. We'd just cut our losses and make another! But HE. He is determined. He is unflinching in His intention to Save us, and reroute us to an eternity of bliss with Himself! I don't totally get it. But I DO totally appreciate it!

Today, I am swearing off resolutions forever. I resolve one thing only, to be faithful to Him who is worthy of that resolve! Nothing else is worth wasting all that energy on! HE is the GOD whose best will for us is to “Prosper and Be in Health, as our SOULS PROSPER”! What part of that are we not down with?

I began writing this, as I said, on “New Year's Eve”. I am concluding it three days into the “New Year”. The Spirit of God has impressed upon me the need to truly “Ring OUT the OLD, and ring IN the NEW”, He has impressed upon me the reality of “The Open Gate”! He has impressed upon me the need for another level of TRUST in my Creator, and another level of Security as His Beloved. I am resolved only to press more deeply into His Presence, where it is said that there is FULLNESS OF JOY. I am ready to lose the Oy, for His Joy! Whatever that may cost me in the process. But One thing I have learned and am assured of, whatever the price, one can never out-give our magnanimous GOD!